Well it’s been a while since I’ve written one of these! As many of you know, I didn’t exactly have a satisfying reading year in 2016. It got to a point where I felt discouraged to pick up books, and I started enjoying my fiction in other forms. That’s not to say I’m not interested in reading literature anymore, but for the time being my pursuits in finding new books to talk about have considerably slowed down.

Today, however, I do have a book to talk about that interested me to the point of actually looking forward to read something! House of Leaves is a horror/romance novel that really, really loves to play with format. And if you remember my post on the ttyl books, I’m most interested in reading books with more creative presentations.

So House of Leaves is set up like a collection of fictional notes, academic-style essays, and interviews regarding a fictional film called The Navidson Record. One of the main characters, Will Navidson, moves into a new home with his wife Karen and two children, hoping to either take a break or retire from a life of traveling the world for his photography career. He wishes to document his family life in a quiet, suburban environment for a change, so he sets up cameras around the house to capture everyone’s day-to-day activities.

When the family returns home one day, they find an undiscovered door that leads to a hall connecting two rooms in the house. Looking at floor plans reveals that they didn’t just miss it, but this hall isn’t supposed to exist at all. Will also discovers that the dimensions of the house are off by 3/4 of an inch; the inside of the house is slightly larger than the outside. He calls his brother Tom to help investigate any possible causes, and eventually a new door appears in their home. This time, however, the other side of the door is more threatening. There is a very dark and cold hallway that leads into a seemingly endless maze. When trying to explore it, Navidson gets lost and almost doesn’t make it back. Not only is the inside a labyrinth, but the halls shift, making any progress markers pointless.

Navidson eventually makes it back home, but his curiosity needs answers. Although he promises not to go back because of a promise to Karen, he does hire a professional explorer named Holloway and his crew to investigate for them. Navidson also outfits them with filming equipment so Holloway’s crew can document what they find.

Eventually the team discovers an enormous, spiraling staircase that leads deeper underground. However, after descending for at least half a day they realize it’s not ending and decide to head back. Future expeditions cause problems with Holloway’s mind, convincing him there’s a monster lurking somewhere. Navidson, Tom, and their buddy Billy also believe something else is lurking in the darkness; they find unusual scratch marks in the halls and Holloway’s team also finds their progress markers shredded as well. Holloway eventually shoots his own teammates, who flee and try to survive until Navidson finds them with his rescue team of Tom and Billy.

They eventually make it out, but one of the crew dies in the process. Navidson also finds a recording of Holloway’s final moments before killing himself, and sees/hears the body being dragged away and consumed. The house eventually starts transforming outside of the mysterious hallways; floors in the main house collapse and threaten to swallow everyone inside. When Navidson’s daughter is still trapped inside when everyone else has escaped, Tom goes back to rescue her. He gives her to Navidson just before the house takes his life.

Karen, who has already had enough of her husband’s shit, finally convinces him it’s time to go. Karen takes the kids while Navidson says he’ll meet with them in a couple of days after he tries to salvage his footage. However, he doesn’t return, and Karen is conflicted whether she should finally just leave him or if she should go find him herself. She eventually does go after him; Navidson couldn’t help himself and needed more closure about what the house actually is. Karen rescues him from the dark and that’s it… sort of.

What makes House of Leaves unique is that this main story is basically a summary of Navidson’s documentary, which was released as a film in the book’s universe. There are intentionally missing pieces to this whole story, so if it feels unfinished I supposed you could say that’s one reason why. The “essays” on the film that summarize the plot (and give genuinely interesting insight into small details in the film that expand or theorize about different parts of Navidson’s relationship with Karen or the house itself) I believe were written by an old man named Zampano, but I’m not 100% sure on that. Mixed into that are journal entries, newspaper clippings, interviews, and other material that try to help us understand the mystery of this house, this documentary, and whether or not it all really happened.

Zampano is the person that was compiling all of this information together. He died before House of Leaves even started, and it’s here that the other main character of the book comes into play. And unfortunately, he’s the worst part of the entire novel for me: Johnny. He’s a 20 or 30-something guy that works in a tattoo parlor and mainly goes around abusing drugs, getting plastered, fucking random girls (sometimes all three at once), and ejaculating philosophy to… I guess make him seem deeper than he actually is. If you couldn’t tell, I’m not exactly a fan of this type of character, so being stuck with him for half the book when something infinitely more interesting is going on in the other half really hurts an otherwise great reading experience for me.

So for whatever reason, Johnny takes an interest in Zampano’s work and begins editing and finishing the compilation himself. During this time, he suffers from hallucinations, feelings of cold, claustrophobia, and other symptoms that parallel those suffered by the exploration team in Navidson’s house. I guess there’s supposed to be some kind of connection from reading about the situation to actually being in the house itself, but with Johnny’s self-destructive habits I can’t even take him seriously as a narrator. And while he may have been meant to be an unreliable narrator in the first place, seeing him abuse his life so often makes me think his symptoms have nothing to do with The Navidson Record, but just with his drug and alcohol abuse.

In fact, I don’t really feel like Johnny has anything to do with The Navidson Record at all. I think he was meant to be a vessel in which the reader can see that the collection of essays, interviews, etc. were meant to be a work of fiction within this fictional world, if that makes sense. I think if House of Leaves was, by itself, this random collection of documents, readers may not understand that this is a work of fiction. So Johnny is essentially a character in this book that was meant to discover The Navidson Record and present it to the reader in a more understandable way.

And if that’s all there was, then that would be fine. The thing is, among the many footnotes throughout the book, Johnny will randomly go off into tangents on his nights of debauchery that honestly didn’t feel like they held any real purpose. There would be so many times when I’d be in the middle of an exciting discovery about the halls in Navidson’s home, only to be interrupted for 10 pages about how Johnny dropped acid with some random girl and then went back to her house to fuck her. I found everything about Johnny extremely obnoxious; I ended up skimming his sections just to get back to The Navidson Record, which I honestly think this entire book should have been about. To make matters worse, the end of The Navidson Record is kind of tossed to the side in favor of a series of letters from Johnny’s mother to him. There’s a good 60-70 pages worth of letters, too, which makes the actual ending to House of Leaves pretty anticlimactic.

Johnny’s sections aside, though, House of Leaves was the most interesting book I read in a while. It had me captivated and I looked forward to each time I sat down to read it. The books plays with format a lot, not just with the different types of documents, but with page layout as well. The book is close to 700 pages long, but a lot of the pages don’t even have half a page’s worth of text on it. Sentences and words are sometimes scattered about the page or arranged in a certain way to compliment the way the halls in Navidson’s house are changing or how the mental state of certain characters is transforming.

The only thing that disappointed me (aside from Johnny) is that there are no real answers given to what the deal with the house was or if there was a monster inside. There are some clues given throughout the text that hint the house exhibits interstellar properties and that it may predate the Big Bang, but that’s about it. I don’t necessarily hold this against the book, though. Mystery and horror stories often don’t offer satisfying answers; the thrill of the buildup is usually supposed to be more satisfying than the conclusion. And since this is also supposed to be a romance story, I’m happy with the way Navidson and Karen’s relationship was explored and arguably fixed by the end of the book (which I’ll admit I haven’t done a very good job explaining in this post).

All in all, I definitely recommend checking this one out. 700 pages is a lot, but with how the pages are laid out I’d say it’s more like 400 pages. It’s a different kind of book, so if you’re looking for something to read that’s less traditional please check it out!

Thanks for reading and I hope you’re having a great week! 🙂 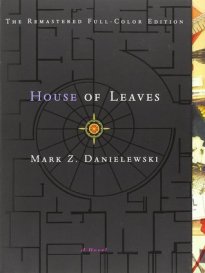