After trudging through Dracula for a month (and a half), I felt like reading through something significantly lighter. There are a few faster books from my collection I’ve been wanting to reread lately, but before I dive into them I felt it was time to give this series a try.

I’ve never read any of the A Series of Unfortunate Events books when I was a kid. In fact, I don’t think I’d even heard of them until the movie came out in 2004. I barely remember it at all, though. At some point I ended up having a box set of the first three books in my house; whether it was always there and I just didn’t notice, or someone gave it to me as a gift for Christmas — I’m not sure. (Although I found my ticket stub in the first book, so I’m assuming it was the latter.) Either way, I never read any of them, and I think I know why. I probably opened one of the books up, skimmed a few pages, and thought to myself that these seem a tad too childish (I was 16 or 17 at the time).

It wasn’t until the past year when one of my friends actually recommended reading through them. She was a big fan as a kid, but said she enjoyed reading through them again as an adult. Was it nostalgia, or was there something in them for adults, too? I dug out that box set and put it aside, intending to read at least the first book at some point. I mean, if I can enjoy cartoons and video games meant for kids so much, it’s possible to enjoy a children’s book series too, right?

Each book was short and pretty basic, so I’m going to combine the first three for this one post. The first book, The Bad Beginning, introduces us to the three Baudelaire children, Violet, Klaus, and Sunny. Violet’s 14, and she’s interested in mechanical things and inventions. Klaus is a couple of years younger, and he’s a heavy reader. Sunny’s a baby, and she has sharp teeth and likes to bite things. I don’t want to say these are their only personality traits, but…

The three Baudelaire kids lived a pretty nice life, doing their things while living with their wonderful parents in a nice mansion. One day, however, their house burns down and takes their parents in the fire. The children were out for the day when it happened, and their parents’ friend Mr. Poe was burdened with sharing the unfortunate news.

According to their parents’ will, the children are supposed to live with the nearest relative, which unfortunately happens to be Count Olaf, a cartoony villain who will do anything to get his hands on the Baudelaire fortune. But unfortunately for Count Olaf, none of the children can even touch the fortune until Violet turns 18. So in the meantime, Count Olaf treats the kids like garbage, making them do horrible chores while verbally (and in one case with Klaus, physically) abusing them.

The kids try to tell Mr. Poe what a terrible person Count Olaf is, but, for lack of a better word, he’s a turd. He can’t focus on one thing for more than like two sentences and ends up shushing the children or telling them generic advice instead of taking them seriously.

Being a turd, Mr. Poe calls Count Olaf and tells him the children came by his office to voice their concerns about their living arrangement. Count Olaf appears to show a change of heart and begins acting nicely towards the kids, even offering them roles in his upcoming play. Even though it sounds fishy, they go along with it.

Count Olaf’s character is supposed to marry Violet’s character in the play, and his neighbor, a real judge, will be the judge (or pastor? I forget) in the play as well. The two are wed, and although his plan was revealed, it was too late; by law Count Olaf has access to the Baudelaire’s fortune. Or he would, if Violet would have made her vow with the proper hand. Saved by a technicality, the kids exposed Count Olaf but he escaped.

In the next book, The Reptile Room, Mr. Poe finds their next closest relative. His name is Montgomery Montgomery, and he’s an eccentric guy that studies snakes. He’s very friendly, gives the children what they need, and they’re very excited to begin researching snakes with him. In fact, they’re supposed to go on a trip to Peru for their research soon, but there’s only one problem.

On the way to the harbor, Count Olaf crashes his car into Mr. Poe’s. Mr. Poe is as useless as ever, although his buffoonery buys the children some time while they figure out how to prove Montgomery Montgomery was murdered by Count Olaf, who Mr. Poe believes is the assistant. When his plan is foiled, he escapes again.

The third book in this collection is The Wide Window. Mr. Poe places the children in the care of their Aunt Josephine, who is afraid to do everyday things like turn on the stove. She’s kindhearted, but understandably frustrating to live with. While shopping for groceries, the children and their aunt run into Count Olaf again, who is in disguise as a sailor. He flirts with Josephine, who will not listen to the children when they tell her he’s Count Olaf. He eventually threatens Josephine, forcing her to write a suicide note that says Count Olaf (still under the guise of the sailor) will be their new caretakers.

The children find several issues with the note and determine that Josephine is not really dead, and eventually track her down. After rescuing her, Count Olaf runs into them again, this time throwing Josephine overboard into water containing fatal leeches. The kids once again prove who Count Olaf is to Mr. Poe, and he escapes again.

From what I understand, there are 13 books in the series. I’ve heard they get more interesting, shedding light on Count Olaf’s mysterious eye ankle tattoo and revealing more about the Baudelaire’s parents’ deaths. I’m a little disappointed there wasn’t anything like that in the three books that I read. They were fun, but they left me feeling like each book was self-contained, following a similar, predictable formula.

This series, at least from what I’ve read, definitely seems to be for kids. The print is large, the narrator constantly explains what bigger words mean, and the whole story sounds like it’s meant to be read out loud with a little gusto to a young audience. Honestly, I didn’t really see anything that adults would gain from it (although I think there were a couple of topics like a creepy uncle marrying a 14 year old girl or said creepy uncle murdering people that some parents may not find appropriate for kids).

That being said, there was something that grew on me while reading that made me curious to want to read more. I enjoyed that each book was about 200 pages and were fast reads to boot, so maybe something about finishing each one so quickly and being able to go into the next had something to do with that. I don’t know if or when I’ll read more, but when I do I might talk about them if I feel like they do anything different enough with their presentation.

I’d recommend trying a book or two out if you’re looking for a fast, light read. Like I said, these three books definitely felt like they’re meant for kids, but they were entertaining and charming enough for an adult like me to, at the very least, enjoy passing time with.

Thanks for reading and I hope you’re having a great week! 🙂 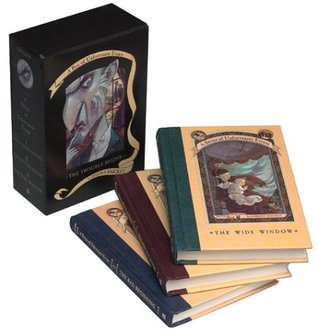