Today’s book is different from the usual stuff I talk about in these posts. This time I’m going to be discussing a book that’s more like an analytical essay. And normally, I probably wouldn’t cover something like this since I don’t have as much to say (I normally wouldn’t read something like this, for that matter), but considering the subject matter I wanted to not only read it, but at the very least briefly talk about it.

First though, a couple of random things about me. I like to read. I also like to play video games. Despite most of my posts discussing books, if I had to choose I think video games hold more of a place in my heart. For better or worse, at the end of the day my video game related experiences stick out to me more than my reading ones. I don’t really know why, because both are important to me. Maybe one of the reasons is because I’m more of a visual and audio person, so when something particularly interesting or moving is happening in a TV show, movie, or video game, it naturally grips me more easily. That’s not to say there aren’t moments like that when I read, but I’ll admit that between a reading year that’s usually providing me with experiences that are mostly only okay at best and maybe even how quickly I go through them, I’ve been finding it more difficult to get those same memorable moments from books alone.

Maybe it’s also because of my current surroundings. When I was in high school, most of my friends were into video games so naturally that played a bigger role in my life. When I studied creative writing in college, books were naturally more of a focus because the people around me all had that in common. At the moment more people I know are into video games than reading books, so I guess as a result I’ve started leaning towards that side of the spectrum again.

But that whole time, I always thought it was weird that most of these people in my life either liked one activity or the other, but rarely both. And I can’t help but ask, why? Both are on the nerdier side of life, and I can get why hardcore readers and hardcore gamers might not like each other, but it always struck me as kind of weird there isn’t more of a shared interest.

Which brings me to today’s book, How Games Move Us: Emotion by Design. I felt like the title said it all: a book showing how video games can be as emotionally captivating as any other medium. I was pretty interested and hopeful that maybe this would be something that could show other people that video games have more potential than they may give them credit for.

How Games Move Us is separated into four main sections. The first takes a look at different parts of game design that help create a meaningful experience. Katherine Isbister talks about things like how player characters and the role they play within each game affect how the experience impacts the player.

The second section is about playing with other people and how that leaves a lasting impression on people. Whether it’s with people in the same room or one person playing online with many, the author explores how playing with others affects us.

The third section is more or less about motion controls, or using movement to play a game. Different examples of games show how physically moving contributes to a more immersive experience and how there’s more potential to connect with others through games like these.

The final section discusses examples of how video games build intimacy between people, but honestly it feels more like an extension of the second section. At the end of the day, all of these sections basically try to apply how emotional reactions can stem from game experiences. I think as a whole, it accomplishes this. But like I mentioned before, this book is more like a big analytical essay. And I think it kind of loses me there.

I enjoy a lot of analytical reviews on YouTube, so I don’t think being analytical is solely why I didn’t like it more. It’s more because this is like a scientific analysis. Despite talking about emotions and connecting with people, the entire book has that robotic feel you might expect from reading someone’s school essay on any given subject, filled with source listings in the middle of the read and everything. It feels like a formal presentation, and for a book about emotions and connecting with others I don’t think that’s the best approach. Like I said, How Games Move Us technically tells us how games connect people. But the way it told us could have been a lot more… moving.

The best parts were actual stories told by people. For example, a couple people that played the online game City of Heroes wrote about their experiences. There was a mother and daughter that played, for example, and it was a bonding experience. One of them gave the other a bunch of items in-game, and even though they weren’t great items she kept them the whole time they played because they viewed them as sentimental gestures. Another player wrote about how when the servers were going to shut down and the game would be finished forever, he reflected on all the friends he’d made and unique backstories for characters he’d seen, and how a bunch of them played until the last moments before the game shut down for good for one last hurrah. That was sad and a little moving, and I wish there were more personal stories like this in the book.

I want to say I was expecting something different, but realistically I guess this is the only thing the book could have been. After all, even though I’m sure a lot of people want to hear more personal stories about how video games affected them, a collection of them from random people probably wouldn’t sell as well as this academic essay on how game design affects people at an emotional level.

For that matter, I’m not really sure how well something like this sold. Despite coming out this year, I couldn’t find a copy in my library’s district or in any bookstores; I had to get this one online. I wouldn’t recommend buying it, but if you happen to have a copy in your library or know someone that has it, How Games Move Us might be an interesting read if you’re into this type of essay format.

The thing is, I don’t know who I could recommend this for. Gamers will probably appreciate some of it, but it’s mostly stuff they probably already know. And people that don’t play games might be interested, but I don’t think they’ll be able to fully appreciate what the author was trying to convey due to the mostly scientific tone of the book.

It’s just a shame because I was really hoping this book could have brought a common ground between gamers and readers. But in the end, I don’t think it will.

Or maybe it will. I don’t know. Who the hell am I to say?

Thanks for reading, and I hope you’re having a great week! 🙂 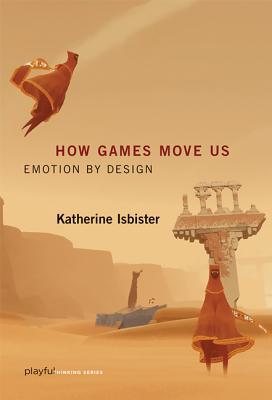 Info for my edition of How Games Move Us: Emotion By Design: