GEEZ. I don’t know what’s been up with me but I’ve been avoiding posting anything here for WAY too long. And it’s not like I don’t have the time. Just haven’t been feeling up to doing social things, lately. Or maybe it’s laziness. I dunno.

Anyway, as promised almost three freaking weeks ago, I’ve had new Perler stuff I’ve wanted to show off for a while now. I had a lot of downtime this past winter after the new year and I was trying to put a lot of effort into making things I’ve promised my friends for a while now. 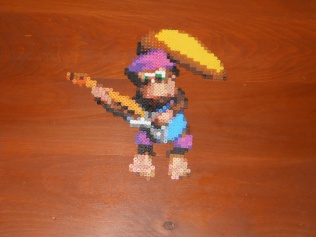 Anyway, Dixie was the easiest of the four Kongs to make, mostly because there were more yellows and purples to mix things up. As you’ll see from the other Kongs, the hardest part of these characters was staring at sprite sheets zoomed in at 800% and trying to differentiate a hundred different shades of brown from each other and deciding which of the five or so shades I had to use and where. All right, there weren’t really a hundred shades of brown, but there were a lot more than I was used to. 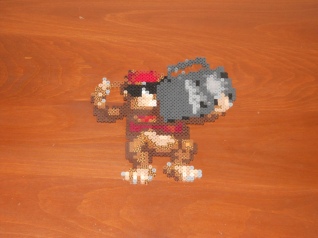 Honestly, I’m not too happy with how Diddy came out. Something just looks off, both with the colors and the shape. Diddy probably took me the longest to do because of redoing him so often because I was unsatisfied. He had more shades of brown than Dixie and I didn’t have enough to match, so I had to make some decisions about what to use and where. The sprite also, strangely enough, didn’t have Diddy’s shirt. There was just this awkward brown shadow where it should have been. I filled that in with dark reds for his shirt instead; he just seemed naked without it.

While I didn’t like how it came out, everyone else I showed it to did, so maybe I’m just being too hard on myself. :3

Next I made Donkey Kong himself, strangely only playable in the first game. It’s pretty weird that a series called Donkey Kong Country only has the titular character available to play as in one game. But I mean whatever. All three games are great and I love them and their characters each. Donkey Kong is a bit bigger and slower than Diddy and Dixie, but there’s a few bigger enemies that only Donkey Kong can defeat with all that extra weight. He can also do this ground slap thing to make hidden items unearth from the ground, but I don’t think anyone actually uses it. Not until Donkey Kong Country Returns on the Wii, anyway.

Considering that he’s basically naked except for his tie, I thought Donkey Kong would be the most difficult of the Kongs to make, with even more shades of brown to deal with. But strangely enough, he wasn’t as frustrating as Diddy. There were actually some yellow-oranges thrown in there, so that helped mix things up a bit. His sprite is from the intro to Donkey Kong Country, when he interrupts his father Cranky Kong playing the music from the original Donkey Kong arcade game and busts a move with his own radical jams from his 90s boom box.

Finally, I made Kiddy Kong. Everyone hates Kiddy Kong. And the only game he’s in, Donkey Kong Country 3. I like him though. He’s a toddler, and I think he’s funny. And this is coming from a person that doesn’t even like kids! I don’t know what everyone’s problem with this character or Donkey Kong Country 3 is. They feel just as natural a part to the series as any of the other characters or games. To me, anyway. Even the friend I made this for hates Kiddy Kong and the third game, so I don’t even know why he wanted me to make him.

Kiddy is bigger and slower like Donkey Kong, and also has some enemies only he can defeat. He can also tumble roll forward, and if you do so off a ledge and just as you’re about to hit water, you can bounce off the surface and reach greater heights (although I could have sworn I’ve done the same thing with Dixie once, as well).

Honestly, I think Kiddy came out the best. He was the easiest, too. The baby blue onesie was a sight for sore eyes. I forgot to take a picture of him at home, though, so I snapped a photo when I gave the Perler art to my friend and he tacked them to his wall.

It was such a relief to finally have these done. I thought complicated Perler art was finally finished. But boy was I wrong.

To be fair, though, my next project was easier. 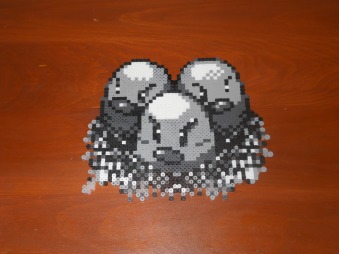 This is Dugtrio, one of the original Pokemon taken from the original Pokemon Red and Blue versions on Game Boy. Why Dugtrio, you may ask? Well last fall, another one of my friends felt like playing a Pokemon game. I had also been in the mood for some Pokemon, and we decided that it would be fun to play through a game together. We decided on the original one, as we were both still very fond of it. I played through Blue, and she played through Red. “But wait!” she said. “Since you’re playing Blue and I’m playing Red, why don’t we pursue out childhood dreams and complete the Pokedex! As mature 20-something adults!”

And so, from last fall through the middle of this past winter, we played through the original Pokemon games on Game Boy, on actual Game Boys with non-rechargeable batteries, using a link cable to trade version exclusive Pokemon. It was a long, arduous, unnecessary journey, but we did it. And it was amazing.

I’ll leave the nostalgia and personal gratification for another time perhaps. But Dugtrio was her favorite member of her team so I offered to make her one out of Perler beads to remember the time two mature, 20-something adults played a video game from the 90s and spent too much time capturing every Pokemon because advertising from 20 years ago told us it was the right thing to do.

But I couldn’t stop there. I had to do more. I thought it would be cool to make custom trainer Perler sprites of us in the style of the Game Boy games.

I’ve got to say I’m pretty impressed with myself. It took a loooong time, but after copying sprites for so long, it was legitimately satisfying to gain some experience making a custom project. It wasn’t easy, though.

So from past experiences working on my Princess Kenny project from a while back, I thought the easiest way to make this was to take a photo of my friend, layer a grid over it, and use the spaces in between each line as pixels and create the Perler piece like I was using a sprite sheet. Long story short, it wasn’t working out as well as I wanted. I wanted more realistic proportions so that’s why I was going by the photos, and while I got them the Perler art just wasn’t turning out great. I tweaked bits and pieces here and there to make it look more like a character from the games without having the character look too much like a little kid (since most of the trainers from the games are kids).

Eventually I started using the rival’s final battle sprite as a reference, since the poses he and my friend were in were similar. That helped, and it was looking better, but still not great. The rival is a guy and my friend is a girl, and I needed help with curves.

After looking through more trainer sprites, I eventually turned to Pokemon Gold and Silver sprites from the next generation of games on the Game Boy Color. They still had the same size and aspect ratio as the original Game Boy games, so they actually helped a lot. And lo and behold, Whitney, the third gym leader, was in an almost perfect pose to use as a better base. I changed the head and clothes up, obviously, but the shape improved a lot after referencing her. And in the end I think it turned out great. My friend loved it, too! I also made an overworld trainer sprite, too, but that was so easy I don’t feel like there’s anything I really have to say about it.

And finally, the same friend actually commissioned me to maker her some custom Perler art. I was very hesitant to take money, considering she was a good friend and I’ve made her stuff for free before, but she insisted and kind of forced me to take something for my time and effort.

She’s a big fan of the Harvest Moon games, at least some of the earlier ones. They’re a series of farming/life simulating games with a cute look to them. She wanted me to make the main character and a cow from Harvest Moon 64. I thought it was going to be complicated, considering the game is from the Nintendo 64 and anything past 16 bits tends to get too complicated to make Perler bead art. But since the game was cartoony and I thought it used sprites, I didn’t think it would be too challenging.

Well as it turns out, I couldn’t find any sprite sheets for Harvest Moon 64. I’ve never played the game before, just seen screenshots. And the game’s characters looked extremely similar to those from Golden Sun on the Game Boy Advance (I think they’re made by the same company?). Now that’s a game I’m very familiar with, and I know there’s sprite sheets for that. So I was surprised there weren’t any for Harvest Moon 64.

Eventually I decided to layer another grid over a screenshot and I worked from there. Except it turns out I didn’t even need a grid, because the screenshot became pixelated enough to work from. Problem was, it was pretty difficult to tell where the character ends and the background begins. This was another tough project. Like the Donkey Kong Country characters, there were a lot more colors to boil down to the few shades available as Perler beads, and nothing I seemed to do looked as good as in-game. Eventually I just started calling my own shots. 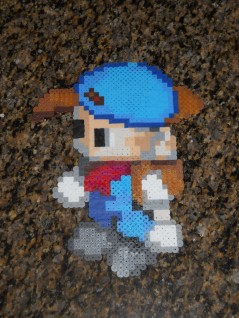 I’m still not thrilled with how the main character turned out. Something feels very off. Maybe the eyes? I don’t know. I really wish there were more blues to choose from so I could have done something better with the hat and overalls. But my friend loved it, and I guess when the person that’s paying you likes it that’s all that matters, right?

I think the cow came out much better. First of all… it’s a cow. Black and white and greys. Even with the bigger color scheme of the Nintendo 64, it’s not that complicated with black and white and greys. But I thought it was boring by itself, so I made a nice little meadow for it to roam in. And I think the meadow helps make this one of the best Perler projects I’ve ever done.

And this is about half of the new pieces I’ve made since I shared my latest Perler update almost seven months ago. As you can see, I’ve been stepping up my game with these Perler projects, but I was happy to go back to something a little simpler. I’m not sure if the next post will cover more Perlers or not. I just finished an interesting book – Kafka On the Shore by Haruki Murakami. But it was kind of confusing and I’m not sure if I can make a proper post about it, but I’d at least like to try. If that’s not up for the next post, then expect more Perler stuff, this time focusing on Undertale.

Thanks everyone for reading, and I hope you’re having a great week! 🙂