When I first saw the title of this book, I was hoping this would be a romance portraying the awkward sensation and troubles that nerds, dorks, and introverts experience in relationships and during crushes. After reading the summary on the back cover, I discovered that wasn’t quite the case. But the book still sounded interesting, so I decided to give it a read.

Geek Love is about a family of deformed carnies and their toxic, disturbing relationship with each other. There’s Al, the owner of Binewski’s Carnival Fabulon, who exposed his wife Lil to radiation and pills to breed a family of oddities to help save the family business. Arturo (“Arty”), their son, has fins and performs in a giant tank of water. Electra and Iphigenia (“Elly and Iphy”) are a pair of conjoined twins that play piano. Olympia (“Oly”), is a hunchbacked dwarf with a magnificent voice, introducing each of the acts and drawing in the crowds. And finally, there’s Fortunato (“Chick”), who appears the most “normal,” save for his telekinetic powers that range from launching someone across the room, reanimating a dead horse, and moving sperm from one person into the womb of another without anyone noticing.

This is definitely one of the more interesting concepts for a book I’ve read recently, and the main family members all stood out to me. Oly is the narrator, and takes us through the years growing up in her family’s circus and watching them fall apart. Arty realizes his popularity and develops a massive ego, eventually gaining control of the circus from Al. He recruits staff and acts on his own, and eventually starts his own cult that worships him throughout the country. Oly takes care of him and does some of his bidding, becoming deeply attached to the point she’s in love with him.

Elly and Iphy struggle against each other the more complex Arty’s machinations become. Elly wants to abandon the circus and do her own acts with Iphy, while Iphy is also in love with Arty and wants to stay nearby. The two eventually fall victim to Arty, with Elly undergoing a lobotomy and Iphy dragging her sister around like a broken doll. He even sends one of his hires to impregnate her after the twins start experimenting with sex.

Chick is extremely sensitive and adorable, and the family adores him. This makes Arty jealous, and eventually he gains control of Chick as well. He sends Chick to study with the family doctor and eventually takes over her role, only with his telekinetic powers and ability to move innards with his mind. Al becomes an alcoholic after losing control of his business and family, and Lil becomes so far gone after all of the pills and radiation.

In the end, there’s a lot of family drama here. Granted, it’s taken to an entirely new level, but the main plot of this book is the drama. It’s interesting and disturbing, but the book isn’t without its flaws.

The biggest issue I have with Geek Love is that it moves. So. Slowly. It took a while to finish, and unfortunately it felt like a chore just to pick up and read. I wouldn’t say it’s written badly so much as there’s a lot that could have been cut out. The book includes a heavy amount of description and narrative that, honestly, goes on far longer than it should. And again, the writing itself isn’t bad (in fact I’d go as far as saying it’s poetic), but it drags and after a while I just want something to happen. I didn’t feel very interested in the characters until about a third of the way into the story, so I guess I can add “slow start” on top of “slow pacing,” as redundant as that sounds.

The dialogue is pretty minimal, too. There are certainly conversations, but they’re used sparingly in favor of narration. And dialogue is also often wrapped in the middle of paragraphs rather than given its own line.

The font is small, too. I hate using this excuse as a negative. It sounds extremely juvenile. But the reality is, if a book is moving slowly, the text is filled with huge chunks of paragraphs, and the font size is small, I’m going to struggle wanting to get through the book. And despite having an interesting concept and characters, it was hard for me to want to read Geek Love.

Thankfully, chapters are usually 10-15 pages, 20 tops. But even then, it usually took me at least a half hour just to get through one chapter. I’m not the kind of reader that can usually sit down literally all day and read an entire novel, but I’m more than capable getting through one within a week at a leisurely pace. Geek Love took me a week and a half to finish, but it felt twice that length. The last few days I dedicated all of my free time to reading it; one day I actually did read for most of the day, and even then I barely made it through 100 pages. Maybe it’s because I was rushing to finish before returning it to the library today, or maybe I wasn’t as interested in it as I thought I was, but reading Geek Love felt a lot like homework to me. The book is 350 pages long, a perfectly normal length for a novel, but it feels like 600. I think I bit off more than I could chew with this one, and I think that surprise sort of ruined the experience for me. I like to know when I’m getting into a long book, especially when my schedule is all over the place and I don’t know how much attention I can give it. It really makes me wish more people listed the length of a book by word count rather than pages.

Despite all that, I would still recommend Geek Love to all fiction lovers. If you’re the type of reader than can blaze through a book without being affected by the number of pages or how long it actually is, go for it. I’ll still stand by my statement that a lot of this book drags, but I think the good stuff will more than make up for it. If the length and chore-like feeling I described sounds intimidating, wait until you have a good amount of free time before picking this one up. It’s still worth reading, if for nothing but the experience, but you’ll probably be reading this one for a while, especially if you don’t find yourself really getting into it after 50 pages in.

Info for my edition of Geek Love:

Let’s jump right into this!

First is Hitmonlee from Pokemon Red/Blue. Why Hitmonlee? I don’t really know. I like him as a Pokemon, but I’ve never really used one before. Honestly, I came home from work one day, I was pretty tired, a stream I wanted to watch was just about to start, and I thought an art project would be a good way to unwind and do something productive for a couple of hours. I picked Hitmonlee at random; I honestly just wanted to make something that day.

Next up is Sandslash from Pokemon Ruby/Sapphire. This one was a birthday present for someone, Sandslash being their favorite Pokemon. It was a lot of fun to make, too! I haven’t really used many yellow beads since my Princess Kenny project, and it’s nice to see a little more color in something I made. 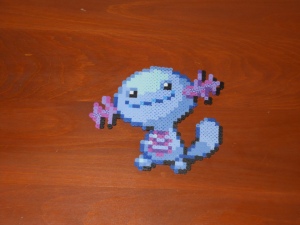 I also made a Wooper from Pokemon Ruby/Sapphire. Lucahjin is currently playing through Pokemon HeartGold blind on YouTube, and when she caught a Wooper I was overcome with awe. I forgot how absurdly cute and derpy this little guy is, and I just had to make one.

You know, it’s funny. There are a lot of shades of blue beads but I often find myself never having the right shade. This project was an example of that. It still looks like a Wooper, but I had to make some different choices off the sprite sheet I was using to make it look like this. It looked awkward before because none of the blues were mixing well with each other. 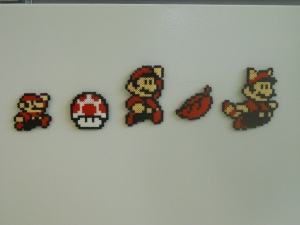 The first three were my major projects during the past couple of months. Other than that, I’ve been trying to produce smaller pieces to trying selling at flea markets. A lot involved Super Mario Bros. 3; here I have Mario, a super mushroom, Super Mario, a racoon leaf, and Racoon Mario arranged on my fridge. 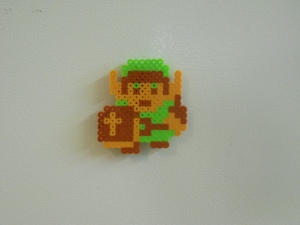 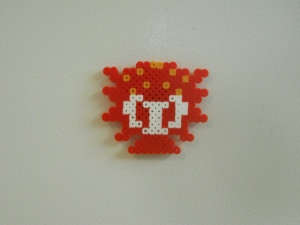 And finally, I wanted to try making some Legend of Zelda magnets, so I chose Link and an Octorok from the first game. I think they came out all right enough, but I was never a big fan of sprites from NES games that didn’t have an outline to them. They kind of come off meh to me. Oh well.

And that about wraps up all my new Perler projects. I wouldn’t expect many new pieces anytime soon, as I’m currently working on a new writing project for NaNoWriMo. This is my first major writing project since last year, and even though I don’t expect to finish it by the end of the month, I’d like to give it my full artistic attention until it’s over. (It’s not even a novel; I’m more or less just using NaNoWriMo as an excuse to work a lot on this project).

Anyway, hope you’re all having a great week! 🙂